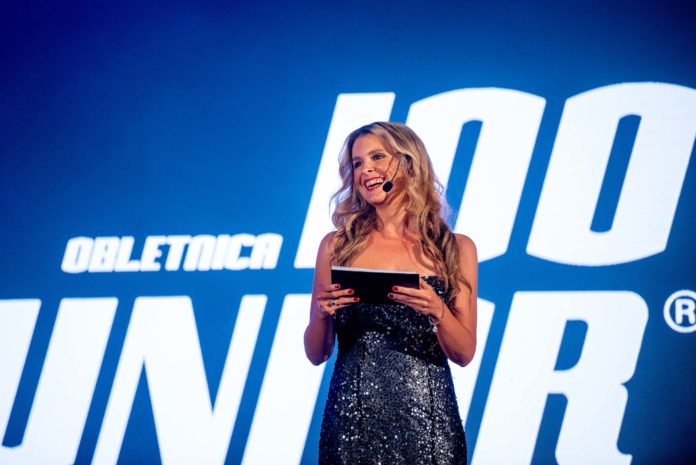 This event was intended to host and celebrate 100 years of experiences, tradition and knowledge not only in Slovenia but also abroad. The 100th anniversary is a celebration not only for people that work in Unior, but also to all business partners that help them develop into one of the most strongest companies in Slovenia and a well-recognized company in the world. Their gross value added per employee is EUR 35,500, while their net revenues from sales last year amounted to EUR 198 million. Unior guarantees a safe investment for their owners with the return on equity of at least 5.5 percent and a future for our employees. They are a connecting link in a dynamic group which exploits its synergies, reaching EUR 255 million in sales and which, together with its associated companies, employs 4,195 people.

This is why celebrating 100 years was a must – as for the employees, business partners, etc.

Our key objectives that we wanted to reach were:

As an agency, we created a lot of events during previous years but this event was special. Because you could not only see but also feel the emotional and heart moving feelings that were among people who helped develop Unior in this decade. From the creativity point of view, this event was very different. We combined all the metal elements that representative Unior and incorporated them on the stage. When performing, The Stroj Machine very well-known performer in Slovenia that plays only on their hand made tools were playing only with Unior tools, we also developed some special Unior instruments (made from Unior hand tools, forge) only for them. Also, food that was served at the beginning of the event as a finger food was served on the Unior hand tool cart and on their hand tools. The creativity that left a lot of people breathless. Our main story was to combine history and future. This is why everything that was surrounding the place where the event was held was in old pictures and old frames, but everything that was going on one the stage was futuristic. Was magical! Also, Raiven who performed was dressed in a futuristic costume, and we brought also from Serbia a very famous and well-known dance group called Mirror Crew who represented metal (etc. mirror) and people dressed only into this saying hello greeting other when arriving and during the event. With black and silver colors (this is namely the new corporate design for 100 years of Unior) the event looked very chic.

From this view, we had two main moments that we could generate as innovative. One was that all the scenography and scene was done from Unior products. And also all the instruments for The Stroj Machine were done from the Unior hand tool department this is how we really represented the atmosphere of Unior.

Also, we created a monography as a book that really represented the history of Unior on more than 250 pages. It was given as a gift to all partners that were invited to this event. Also, this was given later on to all employees that are currently employed in Unior – more than 2.500.

For this purpose, we also created a historical movie that represented not only old videos about Unior but more important statements from people that help to create 100 years of tradition in Unior. Content marketing implemented into event management this is the future. Telling different stories by using video format and people that mostly represent this iconical moment this is very important.

From the execution point of view, the event was without mistakes. Every minute, every segment that was early one planned in the scenario was being executed perfectly. Let us just summarize some key objectives:

Rosana Š. Ravnikar, head of Unior corporate communication: “This event played a significant role in Unior as a business partner, employer, and local company. Novelus professionally and with quality executed their role as an event manager.”

There were three types of results that we could measure during this event. First is the presence of people that were invited. As stated above from all the send out invitation (Unior made a strict selection on whom they are going to invite – their target was not more than 180 people), there was a 97 % confirmation presence at the event. This means that this is above average for all the events.

Unior also made a survey asking employees how would they evaluate 100 years of Unior. From 300 people that answered some of the main and for us important answers are:

Our key objectives in this communication segment were reached. They were:

As stated in the segment above we covered all the important key objectives. We also posted two interviews with CEO Darko Hrastnik in foreign media where Unior also operates. Also, we can segment as a communication result that president Hrastnik gain around 100 thank you notes after the event, from more than 10 different countries congratulating him on the event and its anniversary. Also, the survey done between employees has shown that June (it was recognized as the month on celebration) was very good excepted between people.

For the purpose of 100 years of anniversary, we also created a short campaign (called OLD FOR NEW) where we invited people to bring us the old hand tool that they have hidden in their home and in return they will gain totally new tools. These old tools were later on incorporated into our exhibition that was represented during the event. This exhibition showed tools from the beginning of Unior and later on till now. It showed also how the whole Unior story developed, how did their corporate image develop etc. Most of the tools used in this exhibition were from people that brought them from their home. History of tools is hidden in the homes of people that helped developed Unior tradition. Stories are what counts in this celebration! Also, all the exhibition was done by recycled materials, all the pictures, stories and statements were represented on such materials. In respect to the environment. All the other printed materials, such as the menu, … were also on recycled materials. All the drinks served were in glass, there was no plastic on the event.