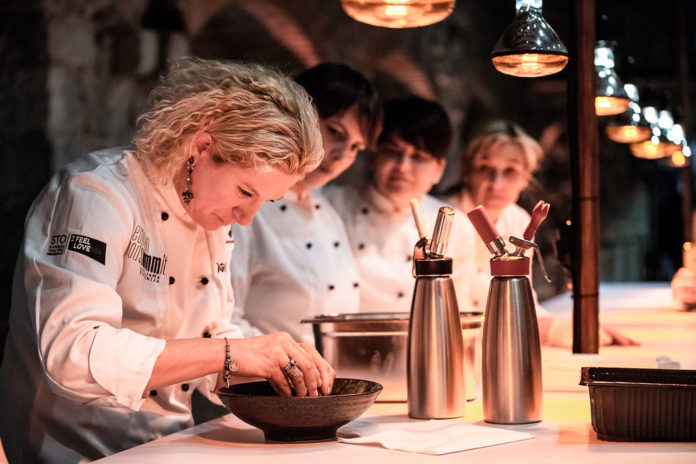 For four days, the European Food Summit transformed Ljubljana into the European culinary capital and placed Slovenia on top of the hottest destinations list. The event was met with strong interest by the local as well as foreign professionals, including chefs, reporters, influencers, not to mention the general public and in particular foodies. In the opinion of Ana Roš, who put Slovenia on the international culinary map, the position of Slovenia has been further improved thanks to the European Food Summit.

One of the biggest challenges in preparing such an event were most definitely international connections and forming recognisability of Ljubljana and Slovenia as a culinary destination. What makes European Food Summit unique and successful is above all cooperation and placing common interests above any individual interests.
One of the most important goals we set for European Food Summit is to contribute to an even greater recognisability of Ljubljana and Slovenia on the world culinary map through a rich culinary selection and various programmes.

Mag. Maja Pak, director at the Slovenian Tourist Board points out: “Projects as European Food Summit improve the visibility and reputation of our culinary offer abroad. But what I find particularly important is that, by listening to the stories about the work and lives of our famous guests, we will be let in on a series of best practices that will assist in our daily activities and future developments.” Our vision to transform European Food Summit into the most important culinary event, not only in Slovenia, has been reached.

Thanks to the extraordinary programme composed of a series of creative events with internationally recognised names in food and top Slovenian chefs, as well as an excellent organisation, the European Food Summit will be remembered for years to come by both the guests as well as the attendees. With its concept, a combination of courage and creativity, the European Food Summit has taken its rightful place among Europe’s best food events, the future editions of which surely should not be missed.

Already at the opening press conference, Ana Roš spoke about how during one of her appearances abroad, foreign colleagues, chefs and reporters asked her if they could be part of the European Food Summit and come to Slovenia. The reason behind the huge amount of interest is also Andrea Petrini, named the “God of Food” by foreign media outlets, while in Slovenia he is known as a true culinary impresario. As promised by the organiser Jezeršek Catering joined by partners STO and Ljubljana Tourism, Andrea Petrini, in collaboration with the Slovenian Queenie, Ana Roš, succeeded in attracting to Slovenia the hottest international chefs, making true the promise of a truly remarkable and animated technical conference. Chefs who usually speak through food were taken out of their comfort zones and invited to deliver an actual lecture at Ljubljana Castle, where the obviously excited conference attendees were served lectures on sustainable values and the future of food.

Another promise made before the start of the event was that the conference sponsored by the STO would also offer solutions instead of focusing merely on promoting the chefs, their establishments and philanthropy. This promise was realized through inspiring speeches by visiting chefs – the ambassadors of progress, who base their work on sustainability and deliberation.

Without a doubt, the Experience Dinner was an example of creativity which intertwined food with performance arts at the highest level. Creations by Ana Roš (Hiša Franko), Riccardo Camanini (Lido 84) and Luka Košir (Gostišče Grič) once again showcased their unparalleled performance talents while Jezeršek Catering once again succeeded in delivering an animated programme, professional organisation and breath-taking aesthetics.

The creative use of the cable car where Jezeršek Catering and Gostilna Krištof combined food, nature and an unforgettable ambiance to create a unique and a once-in-a-lifetime experience, dubbed the Cable Car Dinner, was applauded even by top chefs, who could not disguise excitement for this “simply brilliant” idea.

The organizer of the event is a family-owned company Jezeršek gostinstvo which prides itself with more than 35 years of tradition and experience in catering at various events, organizing over 2,500 of them each year. The Jezeršek company is a reliable and flexible partner in Slovenia and outside its borders, which guarantees creative and culinary experiences and year after year upgrades the European Food Summit (before Gourmet Cup Ljubljana).

The execution of the European Food Summit was based on the work of experienced and professional team of over 60 people from the fields of catering, organisation, marketing and PR. Jezeršek gostinstvo realized the event almost entirely on their own (catering, organisation, marketing and PR, etc.) or with a bit of help from some outside contractors (set-up by Hiša Vizij, design and CPG of the event by AV Studio).

Definitely, the European Food Summit is the newest star on the list of the most important European food events. With that Jezeršek gostinstvo proved once again that they are the only catering business in Slovenia capable of realizing a top-level culinary event at a professional level and additionally contribute to the promotion of Ljubljana and Slovenia as a culinary destination. Jezeršek gostinstvo in positive that the event has inspired a number of ideas that will continue into the future: “The response has been overwhelming. We’re starting to realise that we have created something truly remarkable and unique.”

The greatest criterion for measuring the success of the European Food Summit is without a doubt the satisfaction of guests and other participants, i.e. chefs, reporters and media representatives, partners, sponsors, etc. Numerous praises, positive responses in local and foreign media, recommendations of influencers and renowned critics are most assuredly a great criterion of excellence and speak about the importance of the European Food Summit.

Especially impressed by the friendliness and diversity of enogastronomy in Slovenia were a dozen invited foreign media outlet representatives and influencers, who took to exploring east Slovenia in the context of the special I Feel Slovenia press tour, joined by the visiting conference speakers. After their visit to Hiša Franko for the prepremiere of the new spring menu, the day concluded with the Cable Car Dinner. We were building our story mainly on the basis of content marketing and PR, via various communication channels (TV, radio, press, social media, web) where we included Ana Roš, speakers, TOP chefs (exclusive interviews, recipes…).

Media recognition exceeded all expectations, since the estimated value of editorials surpassed € 525,000. During the period from Dec and Apr, we identified 282 articles, posts ad broadcasts, 225 in domestic media and in foreign media.

In Slovenia at the junction of European geographies and cultures, the European Food Summit, with the main topic of the conference “Food – The bridge toward the sustainable identities of European cultures and nations”, featured an extraordinary programme full of inspiring stories from the culinary world and contributes to the shaping of a sustainable European future. The idea that the conference was attempting to convey is that we need to understand that sustainability in itself is not a value but instead a direction our actions should be aimed at. Neither is the sustainable approach the objective of culinary ventures, but instead the path to the one goal – a remarkable gastronomic experience. Sustainability should become an element of gastronomy, from the source to the plate. We should fall back on science and its findings, which are becoming increasingly important in gastronomy. This includes both culinary science as well as know-how associated with cooking techniques.

The speakers pointed out another amusing paradox that is becoming progressively more important not only in high cuisine, but in gastronomy in general. Namely, the opening and closing of borders have a significant impact on the development of gastronomy on a global scale. Instead of culinary imperialism, we should encourage a sustainable gastronomy prioritising diversity in palates, approaches and experiences.