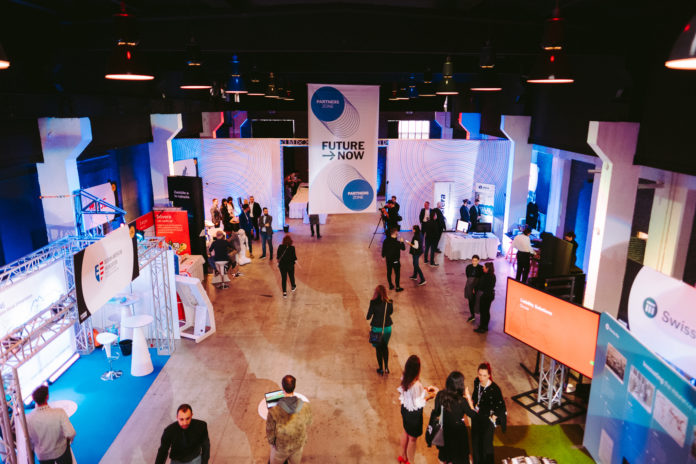 FutureNow is a unique platform, which in one day and in one place featured multiple perspectives: Conference, Start-Up Awards, Expo and Workshops.

Start up Awards was a predecessor of FutureNow, but it was only local start up competition. A new format outgrew Slovakian borders and FutureNow became Vysegrad Four project involving start-up and innovation community in Slovakia, Czech Republic, Hungary, and Poland. The idea was not only for start upers to compete, but also to create an inspirational hub for promising young entrepreneurs. Hence as well as start up competition also conference, workshops and exhibitions were added to FutureNow program. The main challenge was to find a venue which would suit all the needs, having very limited budget and even more limited venue options in Bratislava. After searching for a most functional venue, we have realized that there is not such a place in Bratislava which would serve our needs and we had to create a unique event design for such a platform, where we had to ensure all the program parts could run smoothly, not interfering with each other and allowing functional crowd management.

We packed one place: with 25+ top international speakers talking about the future of work, data & learning, with 12 incredible start-ups from Central Europe, with entrepreneurs, innovators, tech enthusiasts, and investors. FutureNow cover it all: a Start-Up Competition, Awards, Expo, a Conference, and Workshops. We turned the industrial venue – old refinery hall into one integrated space with the visual design allowing visitors to explore and network naturally. The venue is divided into 2 adjacent main halls, partially divided, but interconnected into a great extent. Both halls are very narrow, approx. 11m and it was literally impossible to allow 1000 guests to move in the venue freely, having a choice to attend any part of the program and let them seat in the traditional set up with a stage in the front of the viewers and not losing a front-row spectator experience and close feeling of engaging with speakers which no additional technology such as extra LED or LCD screens can convey. The client was also concerned about losing an atmosphere of community feeling which they are trying to spread amongst participants. As well as two stages there was a need to provide exhibition stands with quite an environment to talk to visitors about their products. All those and much more on the limited not properly divided or soundproof area. We came up with a unique setup and outstanding event design.

Being challenged by client’s needs we could not go with well, long time established set up for seating as well as stages. For the first time in this venue the seating area was not a traditional theater seating, which would in our case spread to 20 meters in length, but descending arena, which kept the audience in the proximity of speakers and at the same time ensuring good visibility. To allow this type of set up we had to use also a round stage, which required hours of rehearsals with speakers, in order to bring spectators from around the arena equally valuable experience.

We designed the arena as a round conference stage for almost 1000 people with 360degree giant overhead screens. Start-Up stage designed as semi-circle shape included 180degree screen including on-stage jury and panel discussions attracting nearly 500 startup enthusiasts. Our visual storytelling was supported by LED strips and bars around the hall. The special layout of expo zone comfortably distributed visitors among the exhibitors creating functional and inspiring space for networking respecting silent zones around stages.

We created 2 stages, 4 zones in 14 hours with 25 speakers, 12 start-ups, 3 finalists and 1 winner on 2,500 m2 for 1900 visitors. FutureNow experienced massive success. We created an amazing buzz and awareness of FutureNow as a new leader inspiring 1900 satisfied visitors revolutionizing the startup scene with a very high standard.

As the guests were mainly young professionals from the so-called millennials generation, which is very conscious about sustainable development, using sustainable practices was not even a matter of discussion. Automatically, all used catering utensils, glasses, plates were produced from biodegradable plastic, there were bins for separating distributed throughout the venue. We tried to minimize printed materials, used digital forms of light navigations, digitalized was also registration and ticketing process.