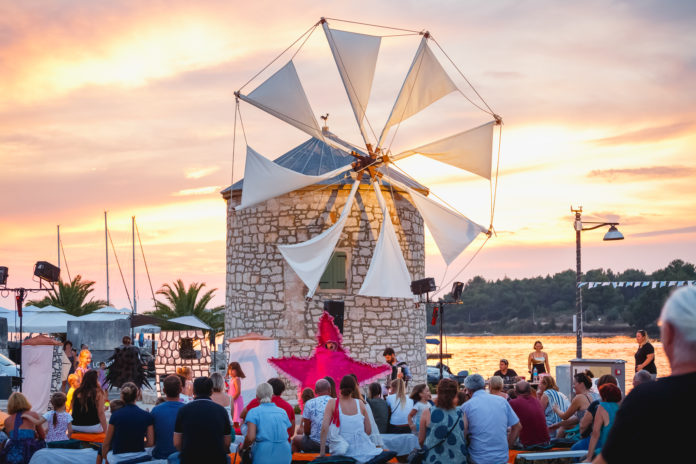 Istra Inspirit enriches the peninsula’s cultural and touristic offer by reviving historical events on authentic locations through Istrian legends and myths. Its goal is to give value to unexploited heritage resources in the destination as well as involve both tourism stakeholders (hotel companies, tourism boards, municipalities etc) and visitors – locals and tourists. Together with partners, Istra Inspirit performs all over Istria and several natural heritage sites. The Istra Inspirit ensemble is continuously learning how to perform as great storytellers, while local communities participating in the experiences are being attributed to a new value and getting recognized. Legend of Thorndancers in Pićan, revives the story of St Nicephorus who was accused of having an affair with his niece (all heard through the grapevine) and thus damned locals to forever dance barefoot on thorns. Crispo at the archaeological site Vižula in Medulin, follows the tragic fates of the Roman hero Crispus, his father and stepmother.

Dvigrad Storytelling Tour at the remains of the medieval castle in Dvigrad follows the history of the place through wars, plague and its final fall in 1714. Historical facts intertwine with the legend of the pirate Henry Morgan and the treasure he allegedly buried there.

Casanova Tour in Vrsar recounts the story of the famous lover Giacomo Casanova while visiting Vrsar. He guides visitors through Vrsar and stumbles upon various people he affected during his visits.

Istra Inspirit is the pioneer in Istria in creating events and experiences on authentic locations by telling stories, myths and legends and involving both local participants and audience. Local communities carry local knowledge of the legends in their own way and share a voice with academic actors and other professionals. The team also researches historical information, consults historians and other people with the knowledge of the chosen stories. Beautiful vistas in central Istria, as well as the coast, surely inspire their creativity.

The 100th session of the UNWTO Executive Council was held in Rovinj in May 2015 for whose members Istra Inspirit had the opportunity to perform its experiences; after that Istra Inspirit was listed in the hundred best tourism stories in the world in the renowned publication issued by the World Tourism Organization.

Istra Inspirit was invited by the Scottish International Storytelling Festival to present Istria and Croatia at the festival ‘Open word, open world’ held in Edinburgh in October, 2017.

Istra Inspirit has been awarded for both creativity and innovation several times. It has received national as well as international awards which contributed to recognizing it as innovative, different and worth expanding.

The project connects people from different sectors emphasizing its interdisciplinarity – locals, artists, actors, historians, musicians, costume and set designer, logistics, management etc. The introduction of unpredictable and unexpected elements in the performances of local myths, legends and stories is certainly one of the ways Istra Inspirit actors “capture” the audience’s attention. Through the years, the Istra Inspirit performers have been educated to become heritage interpreters to enable them to guide the tours (Casanova Tour, Dvigrad Storytelling Tour…) as storytellers.

Istra Inspirit experiences and events start with the interest of stakeholders – local communities, tourism boards, hotel companies etc. The team, then, gathers information needed to create an experience through meetings and getting to know the local community and the subjects involved. The goal is to combine all of their desires and expectations, include local producers, institutions and other interested parties.

After that, the team researches available historical materials, gathers information, gets guidance from historians and decides on the ones involved and their tasks. At this point, the Istra Inspirit creative director writes the screenplay and sets designers and costume makers. In the meantime, the Istra Inspirit marketing team prepares all the promotional activities – timeline and materials Depending on several factors – length, budget, number of actors and locals, etc – the production can take up to several months.

Istra Inspirit has been developing its experiences for the past 8 years. During this time there had been more than 700 performances all over Istria reviving various kinds of legends, myths and stories. It has developed from performing around 30 experiences the 1st year to more than a hundred now. Audience’s reactions and comments are great, local communities and tourism boards, as well as hotel companies each year increase the number of performances and more actors, are engaged. The media coverage is also very satisfying – printed media, radio, TV, social media, while Istra Inspirit social media channels gain more followers year on year.

Through the project, there is the constant use of many ways of communication, online and offline, to inform about the activities of the projects. Istra Inspirit project has won the Golden Zoom award in 2013, an award for the most creative, strategically sophisticated and effective tourism campaign given by Travel Zoom, at the International Conference on Strategic and Creative Marketing in Tourism in Bled. The Umbrella marketing plan has been established – the aim of the strategy was to gather events on the whole peninsula under one brand, Istra Inspirit and it was the first strategy of this kind ever established in Istria. Also, the Istria Tourist Board has also given its support and helped promotion and communication at the national level. The communication tactics involve strong relations with local media in Istria and with some specialized media at national level, through press conferences, releases, interviews and other online and offline channels which result in a huge amount of media coverage which is another proof of the high level of professionalism of the project and its recognition by the trade and media representatives.

The official website is also a channel on which can be found all important information about events and news about the project, as well as on the social media official sites. Social media is also used for the „real marketing “, through Facebook or Instagram live posts from the events, as well as video and photo materials in general.