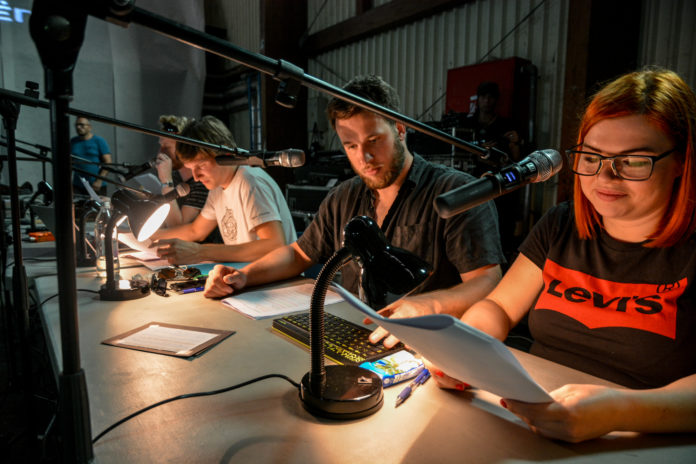 The trigger of the event was the presentation of the new Citroen Berlingo. The event was held for representatives of their Slovenian Sales network, for approx. 200 guests. We took on the complete event preparation and organisation for our client, and found the location, drafted the script and executed the entire event. This was the presentation of the third generation of Citroen Berlingo, which is why our aim was to make a different, humorous and extraordinary presentation, such as the guests of the event, sales agents, have never been to before.

Our aim was to introduce more socialising into the event, a term that refers to the meaning of the word   Berlingo* and is a reference to the club scene supported by Citroën.

*Berlingo Name Meaning: Historically, surnames evolved as a way to sort people into groups – by occupation, place of origin, clan affiliation, patronage, parentage, adoption, and even physical characteristics (like red hair). Many of the modern surnames in the dictionary can be traced back to Britain and Ireland. Similar surnames: Herling, Werling, Merlino, Erling, Berling, Gerling, Berlin, Herring;
Source: https://www.ancestry.com/name-origin?surname=berlingo)

We chose a large yacht warehouse at the Yacht Marina Portorož for the location of the event and rearranged it into a space suitable for the event, including set-up of special scenery that was matching the concept and the idea of the event. We wrote a script, which leaned on the script of the famous Walt Disney Company’s franchise of talking cars from the animated movie Cars. Our cars i.e., actors-imitators were using different voices and melodies of speaking from the models of target buyer groups. The narrative revolved around the reunion of six Citroën vehicles, who are having a conversation which took us into the adventure that Berlingo and people who live with it and drive it to experience every day. The main message was devotion to friendship and desire for adventure.

Our challenge was to make a different, innovative presentation of a Berlingo. This was the third generation of the car, which has preserved all the strong points of the previous generation and has been upgraded with additional modern functions. The new Citroën Berlingo’s bold and decisive character brings an innovative solution in terms of design, modularity and practicality. As a rule, presentations of new cars usually revolve around highlights of the use of technology, while this time, our goal was to surprise guests, sales agents, with a different and humour-filled presentation.

At agency Promo we conceived the story with a creative script, a saga, presented/narrated by six types (of Berlingos)

We breathed life into cars. We wrote a real-life narration about the life of one of its representatives, i.e., of one generation: which is a definition of saga. Each of the cars spoke of his or her »birth«, special features, talents, attractions, features therefore, which represented the epitome of design, practicality, technology, competition and comfort of its time. Every new model of the car was a new highlight. So they all feel superior to the model that came before them, i.e. or several previous models, which brought into the presentation the desired dramaturgical bragging, jokes and inter-generational comparisons. The one thing they all share in common is their superior understanding of the target group’ requirements– those of families and younger, active people. They understand them better than the competitors and even the target group itself.

Each model of Berlingo, of each generation is a »cool guy«. It is a fresh, original wind of Citroën’s original unique creativity in the automotive world.  It is proud, with just the right amount of self-righteousness. It went to become a global success with a generic name, right! It denominates general features of family minivans. After leading a revolution, today, Citroen Berlingo is the »golden« standard and avant-garde in its class.

The story concludes with a movie-like, happy end, when Berlingo and Belringa go on a date, paving the way for the fourth generation of Berlingo.

Presentation of Berlingo’s evolution, development of the car itself, is a precisely planned vision; and vision always starts with imagination. Cars are personalities, and marketing is often about personification. Presentation gave arguments in favour of trust in the present and the future, which, in its start is always animated, springing from tradition-continuity-Avant-garde. The comedy-infused and surreal presentation was based on highly categorical and dramaturgic confrontation that all the previous models shared as well, models that are still alive, something that became more intense in the auditorium through ability for memorisation and presented education.

The event was set in a warehouse, which we redecorated into a presentation area and provided it with lighting and video technology. We recruited a group of actors to help with the performance, who dubbed all dialogues live on location, by turning themselves into ,,Berlingos,,. Musicians were also hired in order to help personify cars and there was a dialogue in rap music-style, which additionally animated the audience. Added value certainly came from the fact that we managed to convey and educate guests on characteristics of Berlingo in an entertaining way.

The client Citroen Slovenija was highly satisfied with the event. The guests loved the innovative delivery of the presentation, the script and performance.

Communications with guests (pre and post event) were managed by the client. Visual communication (projectors, light techniques) was used at the event itself, as well as verbal communication, which thrilled the guests. The Launch allowed us to penetrate into other areas of communication, as the event was part of the complete content communication package, advertising campaign, PR, etc.

Dialogues in the script were drafted in a way which accentuated environmentally-friendly aspects of the car.