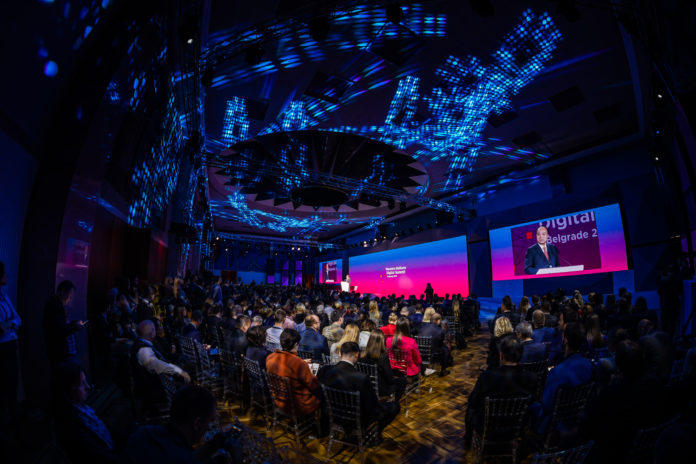 The biggest digital summit that gathered six leading economies of Western Balkans at the monumental Palace of Serbia building.

The Summit brought together representatives of governments, businesses, regional organizations, CSOs, the academic community, and the youth, with the aim of setting up a digital platform for an exchange of ideas and proposals. Six economies joined forces and set a new standard for organization of such events, through a synergy of over 200 speakers, 1,000 people in production, and 4,000 participants.

For the first time ever, the grand hall was darkened, transforming the space for an extraordinary hi-tech experience that started with a magnificent opening scene. The conference, which was held in the two-story space at the Palace of Serbia (“SIV“ building), required the biggest and most significant project solutions.

The event was extremely challenging, let’s name a few challenges:

•    Another big challenge was to organize a high-end summit in a space of great cultural significance. A special task was how to fit a high-end digital summit into a retro environment.

•    Furthermore, we faced challenges in terms of logistic procurement of  equipment and elements from the local market, especially those concerning arranging an import of LED screens from Slovakia.

•    A special challenge was a temporary import of TITAN THE ROBOT – which required special procedures and checks for this event. Another challenge was to meet all the requirements on the robot performance.

Modifying the existing space at the Palace of Serbia to create a brand new digital environment. Designing an interesting content that will captivate the audience in conference rooms throughout the summit. In parallel with defining the content, our team of designers was working on creating a visual solution for a complete visual identity of Serbia Digital Week, as well as redesigning the WBDS logo.

In parallel with organizing the event, our team designed two brand new websites where it applied a plethora of creative and functional solutions, as well as new logos designed exclusively for this event. Along with planing the event, our team developed and completely designed two websites which followed the events at the Palace of Serbia – Serbia Digital Week and Western Balkans Digital Summit. The WBDS web page was published and launched one month ahead of the event, while the SDW web page was published one week ahead of the event.

Several innovative elements were used at the event:

Organization of the event that was remembered as the best one in 2019. It took more than two months, more than 150 people, technicians, logistics and designers. This number did not include performers, dancers and guest stars. Apart from the people that took part in this project, we had more than 200 visual devices.

Numerous connections were established between visitors and foreign delegations thanks to which they have exchanged experiences, knowledge in digital technologies, innovations in the digital world and international trends.

We have created an event structure and communication which is easily transferable to other markets and upgradeable for the local use.

Even though we have used a 172 m² LED screen, the biggest one so far, and TITAN THE ROBOT, we were thoughtful about power consumption, and it is with great pride that we can report that the power consumption was at the lowest possible level.