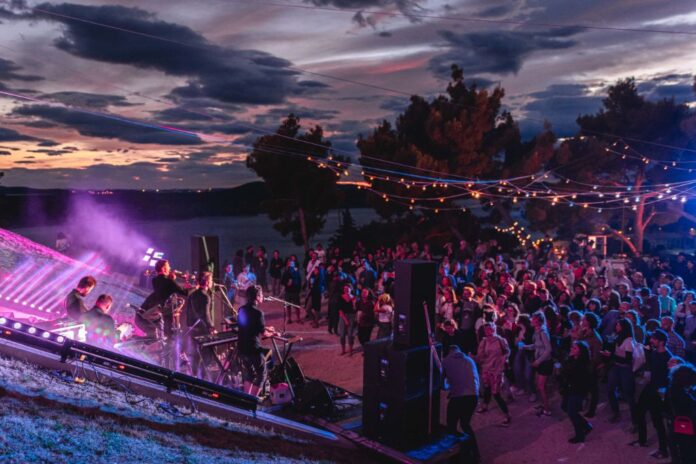 Let’s Rock! was one among the first major music events in Croatia after a long period of silence on the cultural scene caused by COVID-19. First planned as an online event streamed from the venue – St. Michael’s Fortress, Let’s Rock! became a one-day music festival, including 11 bands on three stages in front of their audience, symbolically dated on World Music Day (June 21st) and the first day of the summer. The main purpose of the event was to generate new optimism and hope within these hard times for everyone, especially for musicians who had no live performances for several months, but also the production teams and, of course, the audience. Since everyone involved in this event was emotionally motivated, all of the partners became one big team in only two days, which was the time that took us to build the whole story up, at least majority. Once again, St. Michael’s Fortress proved to be more than just a historical monument that served to protect from the enemies in the old times. In this case, it protected the audience, musicians, other event industry professionals and finally us – the organisers personally from the negative atmosphere and silence. It brought back the much-needed hope that the world as we know it is not gone and it also reminded us that with good intentions great things can be done. Humbled by the amazing feedback during the event and later on the decision was made – this festival is becoming an annual event! Let’s Rock!

As we all know, organising any kind of event is a stressful job. It usually takes a long time of preparation and there are always so many different ways how it can go wrong. Now imagine all of that with the addition of a global pandemic, a cultural-heritage monument as a venue and losing your load in/out the area to a stage.

This event stood against many new challenges and one of the most serious ones was the greatly reduced capacity because of the safety measures which had to be insured. This was also the first time we introduced measuring body temperature and possibly denying entrance to some of the guests. With more than 50% of the audience with a paid ticket coming from other cities, we were afraid of the possible reaction. Luckily, everyone turned out to be healthy. Having over 70 musicians (11 bands), this event was one of the most demanding for our production team because of the complex organization of load-ins, parallel soundchecks, media interviews, showtimes and much more than that – in only one day with the fortress being open for public daily visits in the meanwhile. As a result of good coordination and exceptional positive vibe between everyone included, Let’s Rock! turned out to be one of the greatest music events on St. Michael’s Fortress ever produced.

Creativity or how to keep social distancing on a one stage venue?’

At the time when everything stopped in Croatia because of the lockdown during March, April and first half of May, the social atmosphere was very negative in almost every aspect of our lives. When the lockdown was over, our team instantly decided to wake up the music scene with an event on St. Michael’s Fortress. Motivated to make a change in a negative atmosphere, our team instantly jumped in the organization of this event, no matter of the general uncertainty which was still present and the possibility that all of our work could possibly be for nothing in case of a new lockdown. The idea was accepted wholeheartedly by all of the artists, booking managers, technical and marketing partners in just two days. Everyone was especially delighted when we presented our idea to schedule this event on World Music Day with the intention to celebrate music. At the beginning of June, restrictive measures where eased so we decided to involve the audience in the initially planned online event so that people and artists could finally feel a full concert experience once again. Still, we had to ensure social distancing and avoid big crowds in one place according to safety recommendations. What was the solution? We invented two more stage areas so the event gained a festival character and also revealed new production potential that fortress has.

Although we are well experienced in organising individual concerts, hosting a festival was something new for us. The venue itself is not planned to host more than one event, so to ‘’invent’’ more than one stage that is originally there was a challenge but it resulted as an innovation. We were able to create three different and completely equipped stages that worked out perfectly. One of them, definitely worth mentioning is our parking lot which is usually used as the load in and load out technical area. As well as introducing St. Michael’s Fortress in a new format with more than one stage, we also used the event to promote our newest idea – reusable plastic cups. One of the biggest problems on events is the amount of litter, mainly from the disposable cups made for one user only. To solve this problem, we produced reusable branded cups which you are free to take home as a souvenir. And guess what happened after the event was over? We had no mess and the Earth was grateful as well.

This was one of those events where you can expect things to go wrong on so many different levels, especially since the minimum preparation time. But it didn’t! Here are just some of the things we did and a lot of obstacles that we successfully circumvented.

Our venue, St. Michael’s Fortress was open for daily visitors during the whole preparation time. We gave our best not to disturb their visit while building three stages, backdrops, catering equipment, and having tone rehearsals. What is also complexed about the venue is the fact that it is located on an 80 m high steep with a one-lane access road. The closest parking is 2 km away. You can only imagine how many vehicles were needed for the equipment delivery and transportation of 70 artists. It takes unbelieve coordination skills. Shoutout to our tech crew! Speaking of those 70 artists, we have to mention that they shared only one proper backstage and managed to get ready without being crowded. In all this, we also thought about the outfits and gave out our festival t-shirts to the catering staff. Of course, safety came first and a lot of things to do to assure it. Marking the seats and floor to maintain social distancing, measuring the body temperature of all of the staff, artists and guests, making sure there are enough disinfectants throughout the venue, preparing masks and gloves… And as all of that wasn’t enough, we created a radio studio that had a live broadcast on-site.

The relevance and final successful result of the event are visible throughout the artists and audience that came from every part of Croatia. Statistics show that more than 50% of the audience was from another city which proves the attractiveness of the program.

The great feedback from our sponsors and media partners after the festival idea pitch was also one of the great first signs. Today, they are proud that they took part and helped in the creation of this event. Something that is definitely worth mentioning are the various discounts we got from our partners and artists. Just a reminder, this happened in a time when they were the group that was mostly financially hit from the Covid-19 consequences. We are very much grateful for that and glad that together we did something magical that the audience recognised.

How do we know that? Well, it is easily measurable by the amount of social media posts, likes and new followers. It is also measurable from the amount of press clipping material. And last but not the least, in the most uncertain times, our event was sold out in less than a week!

Although it was a first-time festival, Let’s Rock! really stood out in media space (online and offline) and on social networks. Our marketing team managed to spread the word about the event nationally and sell out all tickets in just six days, with minimal financial investment. Copywriting, design and social network management – the team covered it all in-house. To paraphrase The Beatles: we got by with a little help from our artists who gave a great shout out to their fans to check out the event.

The idea behind the festival was pitched to media partners (news sites, radio, TV, print) who were excited to be a part of the event and had full trust in its success, so they offered their services at a discounted rate. The cooperation resulted in radio and TV commercials, print ads, promotional articles in the most influential Croatian national media – heck, we even got the coolest radio station in Croatia to put their studio in Šibenik during the festival. Few days before the event and weeks after, the buzz around Let’s Rock! was strong, what directly contributed to the overall image of our institution and team, and indirectly to all partners and sponsors involved.

Gender equality
Coming from an unfortunately still conservative society, we pride ourselves for being a company where gender equality has never been an issue. The number of men and women employees is the same and guess what – we earn the same too. Our lady colleges even have some roles that are predominantly known as male positions; such as the production/promoter manager and director too. In that spirit, the event had the same number of men and women performers as well.

Ecology
Doing a little goes a long way, especially when it comes to ecology. Keeping in mind the ‘’Reduce, Reuse and Recycle’’ rule here is what we did:

Reduce – by sending the festival maps and timelines via e-mail to every guest, and by presenting QR codes that
land to our food & drink menu, we reduced paper, printer usage and saved some trees
Reuse – especially for this event, we introduced reusable plastic cups that were served at the bar. Yes, the guests took some of them home to reuse them as a cool souvenir.
Recycle – there were recycling bins with special containers for plastic, paper and other waste