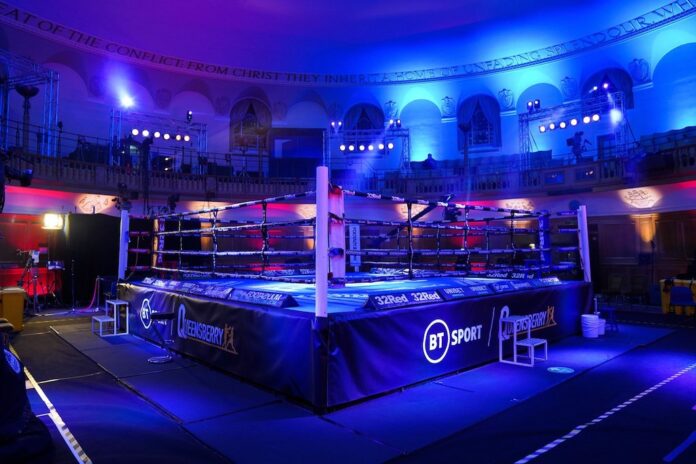 In an incredible reversal, the domestic heavyweight clash was not pay-per-view. Frank Warren, said: “This is about keeping boxing alive and relevant at a tough time and doing something for the fans.” Warren was keen to point out that the Covid outbreak and its negative effect on UK jobs and livelihoods were on his mind as he decided to scrap plans to make the fight pay per view. The blockbuster November event, branded with the apt tagline ‘At Last’, represented the final chapter in a saga that has seen April, July and October dates cancelled because of the Coronavirus pandemic.

Warren opted to stage the boxing at Church House Westminster to signify the return of big-time boxing. The boxing was headlined as a battle for the history books and therefore Church House Westminster, a venue rich in history ticked all the boxes. Warren commented: “Winston Churchill announced the sinking of the Bismarck inside this venue, and soon we’ll know who out of these boxers will sink or swim.”

The boxing was to be broadcast on BT Sport, which meant that the venue’s in-house Audio-Visual and Production team at Church House Westminster had to contact British Telecom on short notice to arrange an installation of an outside broadcasting line on the rooftop of the venue. This request was processed in a particularly short time frame. Having acquired the outside broadcasting line now means that the Church House Westminster is an official UK TV Outside Broadcast fibre connected venue.

Set-up, including the building of the boxing ring and transforming the Assembly Hall, the venue’s largest event space, into a boxing arena, involved three days of the pre-event organisation. The set-up started immediately after completion of a three-day virtual conference for another external client. In addition to the Assembly Hall, the event spaces on the entire first floor of the venue were utilised to bring the production to life. The Hoare Memorial Hall functioned as an interview and media room, live streaming the action of the Assembly Hall using the venue’s hardwired interactivity. Post-fight conferences took place in the Bishop Partridge Hall.

A number of other rooms, also located on the first floor of the venue were utilised as flexible changing rooms, storage areas and staff quarters. Strict Covid-secure measures were put in place in the lead up to the event, including one-way systems and preevent Covid testing to allow entry to specific zones in the Assembly Hall.

The organisers were impressed with the flexibility of the Grade II listed Assembly Hall from their very first viewing.
The dome-shaped room offered additional opportunities which the organisers did not previously consider for their event, such as:

The venue collaborated in BT’s pre-event promotion by lighting up the dome of the Assembly Hall in the colours of BT Sport for an aerial video shoot showing the venue’s rooftop. The venue liaised with Westminster Abbey to allow a series of cables and broadcasting vehicles to park in secluded Dean’s Yard, the venue’s entrance. Under usual circumstances, this would not be allowed however strict times and locations were agreed under exceptional circumstances by the venue’s events team.

The arrival of the boxers were filmed against the backdrop of Westminster Abbey after which they then made their way to the venue’s underground car park, effectively ensuring a secret and secure arrival to the venue.

This was the first live sporting event the venue, Church House Westminster, has ever hosted in its history.  Pre-Covid the venue has been well known in the events industry for hosting prestigious awards dinners and international conferences.
Needless to say, the pandemic has impacted the venue’s ‘usual’ event mix and since acquiring its accreditation as a Covid-Secure venue in August 2020, the venue has proactively realigned its marketing focus to actively target events in line with Government guidance, which has largely restricted the industry.

Thinking outside the box (!) content marketing focused on the versatility of the venue and the flexibility of the team when organising events. The motto throughout has been: “The answer is yes unless we have explored every single possibility”. The venue also offers organisers a money-back guarantee contained in a Covid-clause within the venue’s new terms and conditions, allowing organisers to book with confidence.

The team understood that post-lockdown the single most important case for returning to live events safely would be confidence represented from the venue. It was the responsibility of the team to allay any concerns successfully and efficiently, backed up by the reassurance of the team’s Covid-secure training and recent four-month Covid-safe experience in coordinating new events such as the three-day trade winetasting, in-person examinations, and hybrid events.

In a collaborative manner, the venue team and the organisers worked together from the initial site visit to co-create a memorable event experience. The venue’s team departmental heads were all present during every site visit from the start to suggest best practices and make the organiser’s planning less exhaustive. The premise was that the team at Church House Westminster will take on the organisation and planning as far as the organiser would allow.

The team, which has sadly seen half of its colleagues made redundant due to the impact of Coronavirus, came together as a unit providing direct access to the organiser with round-the-clock availability. It was paramount to enable communication as Government guidelines remained in flux in the lead up to the event. Quick response and turnaround times were the norm. It was not unfamiliar to see the venue’s Event Coordinators during the set-up delivering rounds of teas, coffees and biscuits to those who were building sets. By staying close to the organisers, the venue’s team was able to pre-empt any potential humps and resolve those before it came to a head. In line with the venue team’s rules, the principles of over-communicating and having each other’s backs ensured that the the planning in the lead up to the event, mirrored the event delivery on the night. Unavoidable and unplanned changes to the event plan such as a much later finish than expected where promptly rescheduled.

In terms of press coverage, Church House Westminster, has pushed the envelope for the events industry in light of the pandemic, proudly waving a flag for live events. Articles and features picked up on this excellent positive news which clearly demonstrated that there will always be a demand, real need and necessity for live events. In the events industry, coverage of this event is the concrete evidence that the industry, both suppliers and event organisers, has been waiting to see. It has injected a new-found excitement for re-imagining events and also re-purposing venues as the industry builds back after Covid.

In terms of staff morale, the venue has seen the team, which is literally half the size of what it has been pre-Covid, re-connect and subsequently forming an absolute wall of trust in terms of supporting each other and stepping in when needed, without questions being asked. The awareness of each other’s needs and the team’s overall well-being has increased as a result of introducing a buddy-up initiative before the event.

In terms of new enquiries, the venue’s position as a flexible and versatile events venue has been re-confirmed, having as a direct result of the boxing event, received enquiries for other sporting events, hearings and live performances. As the venue navigates events post-Covid the hunger for unusual events has now become a driving force to show its peers, suppliers, clients and associations that there is life beyond the pandemi for events.

The venue worked closely with the event organiser in the lead up to the boxing to ensure that the venue would feature in their communications strategy. This was especially important as the event took place behind closed doors at Church House Westminster. As the pre-event planning with the events and audio-visual team of the venue was progressing successfully, the press team of the organisers were extremely helpful in creating a stand-alone press release which featured the venue exclusively. Not only was the press release shared within the boxing industry but the venue’s marketing team then also pushed this out to the UK events industry to build anticipation of the fight.

On the night, the organisers ensured that the commentators and pundits on air were ‘generous’ in terms of their mention of the venue. Social media from the event organiser were amplified by the venue’s social media channels which included Twitter, Instagram and LinkedIn.

Following the successful event videos on YouTube from BT Sport Boxing and Queensberry Promotions again mentioned the venue, and so did most other boxing influencers on social and video marketing. The venue created a case study of the boxing event on their website and also pushed this out on email marketing and social media, as well as a press release which was warmly received by the events industry.

Church House Westminster is committed to operating in a sustainable manner to reduce the impact of their events on the environment. The venue holds a Silver Award from Green Tourism as formal recognition of their ongoing commitment in minimising their venue’s carbon footprint.  The venue has also recently been awarded an ECOsmart Gold Venue Award for ‘exemplary’ green standards and for working in a sustainable way to bring significant benefits to not only the venue but also the community in which they operate and their supply chain.

Some of the initiatives that were observed for the boxing included: