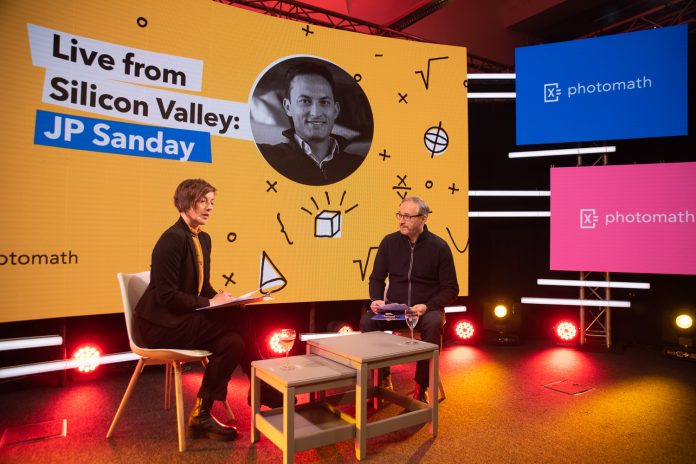 Photomath is the most used math learning app in the world, with more than 220 million downloads. Reason for the press event was new investment of 23 million dollars that the company got for further development. Main goal of the event was to send key messages from the founder of Photomath, Mr Damir Sabol, and from the investor, company Menlo Ventures. Due to the pandemic and restrictions regarding the organization of live events, we organized hybrid press conference. Moderator and the company founder were in the studio, talking in the form of a TV interview, journalists were following the program online and additional part of the program was a live call from investor’s representative from San Francisco. With the scenography elements we also created the atmosphere of TV studio –in the background of the set we’ve put screens with Photomath branding and big central screen was showing the picture from San Francisco. After the official part of the event, journalists were able to ask questions live, via chat. Event was closed, invitation only, to keep the exclusivity of the news. Since there was no guests present live, we delivered them giveaways on the day of the event to their home addresses.

Our key challenge during organization and execution of this event were epidemiological restrictions limiting number of gatherings to maximum of 10 people. Therefore, we decided to make hybrid event. Another challenge was live stream from San Francisco, due to time difference and potential technical challenges.

Since journalists weren’t able to attend our event live, we wanted to make interaction with them stronger online. Therefore, we decided to send them the answer to the main question (What is the amount of the investment to Photomath?) in the form of a quite complicated mathematical problem. Journalists were encouraged to solve the problem via Photomath app if they weren’t able to solve is by themselves, so by the press event all of them new the number, but not the currency and the other details about the investment and the business deal, which made them even more curious.

At this point we already got many feedbacks from media representatives that they are feed up with online versions of press events. On the other side, we had no other option to organize our press event. Therefore, we decided to avoid classical live stream, so we created an atmosphere of the TV interview to make it more interesting for the journalists.

Crucial for proper execution of this event was technical rehearsal that we held the day before the event. It was imperative to assure smooth live stream from San Francisco. For the scenography we used simple, but colourful client’s branding visuals that made nice background and streaming experience for the viewers. Invitation was sent to media via email and by the click to the invitation, they were redirected to the streaming platform. On the day of the event every journalist got a reminder email with the mathematical problem, which solution was the amount of the investment. All participants entered streaming few minutes before start, so we were able to check technical performances and internet connection for all of them. In the technical execution of the event totally participated seven people.

In total we had 23 journalists at the press event. After the event more than 60 media coverages were made – including all key media. This numbers were more than satisfying for client and for us.

Due to big media interest, after the press event, some of the media wanted to make additional interviews and stories about this topic, so in the next days we organized additional media meetings, which resulted in even more media coverage than initially planned.

To make all event eco-friendly, we avoided production of any event elements and went all digital – invitations were digital, and scenography was digital, so no waste was produced during preparation and execution of this event.