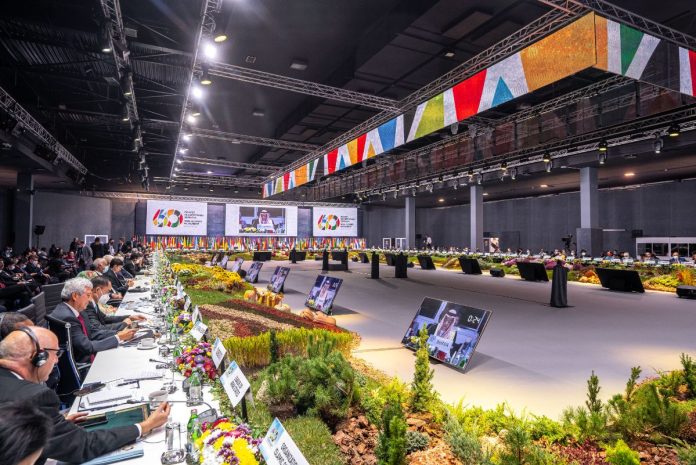 The biggest political event in 2021, the 60th anniversary of the Non–Aligned Movement, was held at the Belgrade Fair on 11th and 12th October. The main goal was to gather the highest representatives of non-aligned countries and to give them unique experience. Our team is entrusted with creative concept and executive production of this meeting for the Government of the Republic of Serbia.

The biggest challenge was to realize the highest political gathering of over 120 foreign delegations and more than 1000 participants in Belgrade, despite the COVID 19 pandemic and the restrictions it brings. The other challenge was to adapt the venue of the event to the needs of the production in order to fully respond to the creative concept of the conference.

The event was officially opened with an audio-visual spectacle: an integrated animation broadcast via mapping on the floor in the central part of the hall, on four large LED screens and to a special installation above the delegate table made of transparent LED screens. Art direction was based on the motifs of water colors, which are melted and changed colors evoked the story of the origin of the Non-Aligned Movement, its history and symbols, as well as its goals which they aspire to in the future. The impressive installation in the main hall attracted special attention hall, on an area of as much as 220 square meters. The installation consisted of living nature full of flowers and greenery, which symbolize Serbian landscapes.

Technical aspect of the event was very innovative. There were face tracking cameras, transparent LED screens, animation broadcast via mapping on the floor in the central part. But, most importmant was an ambience of the conference. A combination of a high – tech equipment and warm natural installations were an unprecedented setting for a political event.

An event of this type required the highest technical and logistic requirements and level of production. The execution of this project required one month of pre-production process and over 150 associates. Five automatic smart motion cameras covered Hall 5 of the Belgrade Fair.

The two-day summit of the Non-Aligned Movement was attended by more than 300 domestic and foreign journalists, who have written and published over 200 announcements and reports from Belgrade. It is particularly significant the fact that Serbia, by organizing such a large international event, has gained attention foreign policy success.

The event from Belgrade was covered on all domestic media channels, as well as on the leading ones world TV stations, including CNN, BBC, regional media house Al Jazeera and many others.

For this occasion and marking six decades since the first conference of the Non–Aligned Movement, 60 tree seedlings were symbolically planted in park of Friendship. Namely, the idea for the formation of a Memorial Park of Friendship came from the Young Highlanders who, in the name of holding the First Non-Aligned Conference in Belgrade in 1961, decided to establish a memorial park as a symbol of the struggle for peace and equality of all peoples in the world.