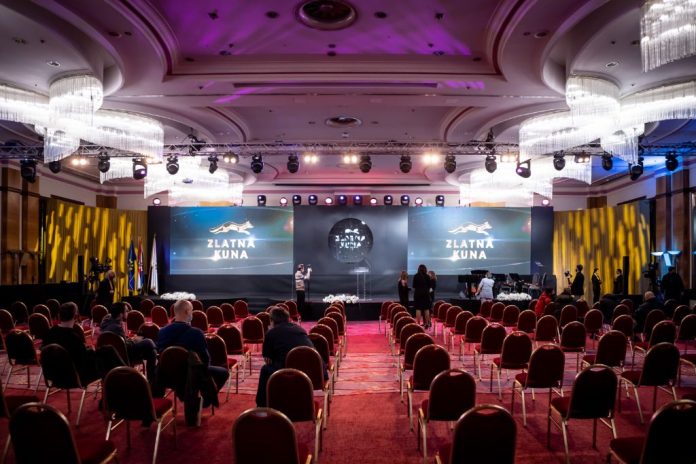 The Croatian Chamber of Economy is an organization that connects key sectors of the Croatian economy, including county chambers, multiple associations, international representative offices, and others. Zlatna kuna is their yearly event, organized for 25 years with the goal of recognizing and awarding most successful Croatian companies from different sectors. The 25th Zlatna kuna event was held on November 9, 2021, in Zagreb at the Westin hotel. It was an evening event, broadcasted on national television. During the event 9 awards were given. The event hosted 200 guests and was organized under epidemic restrictions. The specific of this event was in the fact that it hosted high level government representatives, so official protocol had to be followed. Aside to the official part of the program, the client also demanded an entertainment program, that had to fit with the prominent level of the event and its guests. After the award ceremony, catering was served during the networking.

Given that Zlatna kuna was organized in November of 2021, when the pandemic restrictions were still significant, it created a certain uncertainty at the beginning of organization, because we couldn’t be sure which rules and restrictions will apply at the day of the event. Therefore, we had to be ready for adjustments and changes in organization processes. On the day of the event restrictions were quite substantial, so even during the invitation process we informed guests that COVID certificates will be required, or on-site testing. At the venue we organized a testing center, right next to the registration point. Also, all the members of the organization had to be tested, which required extra time and coordination. The number of people was limited to 200.

Zlatna kuna is a business event. Guest profiles are businesspeople, government, and institution representatives. Therefore, strict rules and protocols are applied, but the client was open to new ideas, to present themselves as the institution, and the event, as open to modern and innovative ideas. That is why we decided to make extra effort at the stage – in the center position, between two LED screens we placed hologram animation of Zlatna kuna award statue. The award ceremony we made more glamorous, Oscar’s-like, with golden curtains on the sides of the stage, large, golden envelopes with winners, hostesses at the registration has business outfit, but with golden shirts and bow ties. Also, the venue was richly decorated with dominant flower arrangements, to create glamorous effect.

The innovative approach in this type of event we showed through hologram animation of Zlatna kuna statue that was placed in the central position of the stage.

The preparation started with invitation management and preparations for pandemic restrictions. Two months before the event we started collecting photo and video materials from the nominees. The voting and the winners were held a secret until the ceremony as well as a short announcement animation created for each winner. The setup of the event started in the early morning. The entire process was carefully coordinated for the purposes of the live broadcast, including the whole script and preparations with performers and hosts. The length of the event had to be planned to the minute and we had two technical rehearsals, and we had to coordinate security checks of the venue. According to the protocol details related to the state flag, seating chart, speech schedule, decorations, and catering had to be respected. The event was successfully executed, the client was especially content with technical and decorative interventions that made the whole event more attractive and progressive.

Due to the pandemic restrictions, the number of people was limited to 200, so all seats were filled. Media representatives were also following the event, especially daily and business media.

Communication of the event was mainly managed by the client, with our technical support in preparation of content and providing photo and video materials. Client arranged PR campaign via press releases. Since this is a well-known and high-level national business award, no additional efforts were required in order to create interest in key media. The whole event was photographed, filmed, and communicated via media and social networks.

In order to reduce an impact on the environment, this time we suggested to the client to send digital invitations and they decided to follow through with this suggestion.