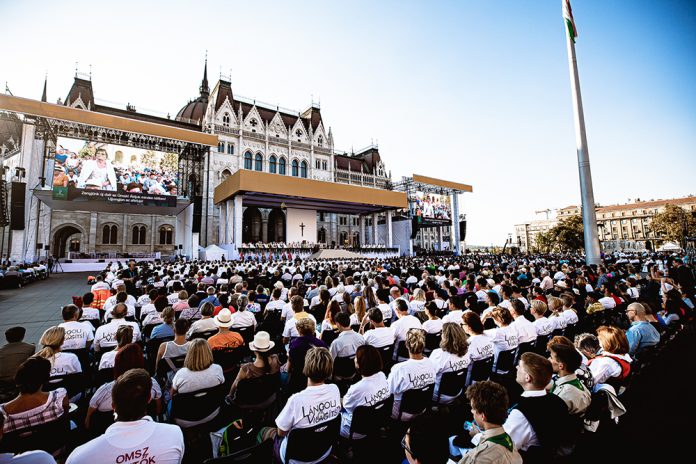 The worldwide series of celebrations of the Roman Catholic Church to deepen the knowledge and veneration of the Eucharist. Highlights of the liturgical events included the opening mass in Heroes’ Square in Budapest, the Saturday evening mass in Kossuth Square, followed by a candlelight procession and light show, as well as the closing mass with Pope Francis.

The event was held in 23 locations in Budapest, Hungary. Including HUNGEXPO (the largest convention and expo center in CEE region) and a gigantic stage at Heroes Square. Because of the special nature of the event we implemented several unique installations and solutions.

Because of the special nature of the event we implemented several unique installations and solutions.”The hymn “”Sing of Victory”” was the anthem of the 34th International Eucharistic Congress, also held in Budapest in 1938. As the competition for the anthem of the 2020 event was unsuccessful, it was decided to have this earlier anthem rerecorded to meet contemporary requirements. Three young Hungarian singers sang the new version together with the choir and orchestra of the Hungarian State Opera House.

This hymn was also the musical base for the closing performance of the candlelight procession on the last day, performed on the large stage in Heroes’ Square after the final blessing.

More than 1200 children received the Sacrament of First Communion during the opening Mass of the International Eucharistic Congress.

The event was organised by 2,500 volunteers, including 600 scouts. The whole event was attended by 3100 choir members.

More than 100,000 people attended the Congress in-person and millions of people in 160 countries followed the events via broadcasts. The closing Mass was broadcast on television or computer screens in 160 countries.