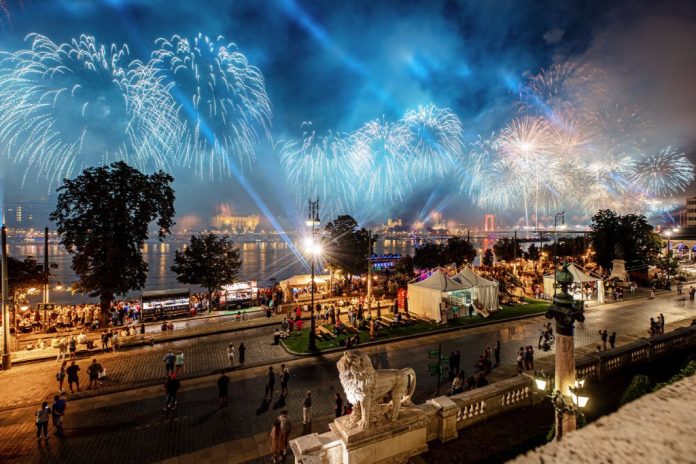 This year, we celebrated St. Stephen’s Day, the founding of the state of Hungary with three and a half days of events at more than 20 venues. The celebrations included state ceremonies, the St Stephen’s Day parade, the flag-raising ceremony, the military officer’s Oath Ceremony, the Holy Mass and, of course, the fireworks. The Holy Crown was also on display free of charge in the National Assembly building.

The 3,5-day event kicked off on 19 August with the Street Music and Food Truck Show and the Szabadrét Festival. In the case of the former, the Veszprém Street Music Festival moved into Szabadság Square and the surrounding streets with the city’s coolest food trucks. Over three days, 48 performers gave 151 concerts in a wide variety of musical styles on one of the seven stages and five street music venues. The Szabadrét Festival was a laid-back, picnic-style event aimed at young people on Elisabeth Square, with domestic acts, mostly electronic music producers, DJs and progressive live acts that crossed genre boundaries.

The Heroes’ Way, which commemorated seven prominent figures of Hungarian history with spectacular role-playing performances, was held in Buda Castle. In Kapistrán Square, there were also military programmes and concerts by the military orchestra. Panorama Classical was organized on Gellért Hill with classical music concerts in a pleasant picnic atmosphere and a wonderful panoramic view in the Garden of the Philosophers. The Buda programme also featured Retro Tabán an exciting musical treat in the Tabán, a cult venue with a decades-long rock and pop concert tradition.

One of the main events of St. Stephen’s Day was the tradition setting parade on Andrássy Avenue, featuring three units: Earth, Country and Nation. During the programme, giant installations with the three themes were paraded on Andrássy Avenue. For example, the legendary animals of Hungarian origin tales, St Stephen and the Virgin Mary, as well as the tricolour flag representing the nation. In addition to the huge installations, the programme included a spectacular show with hundreds of performers.

For more than ten years, the Street of Hungarian Flavours in Lánchíd Street has been an essential event of the St Stephen’s Day celebrations. A special feature of the event is that it is the first time when you can taste the Cake and Sugar-free Cake of the Country, and this is also the debut of the St Stephen’s Day bread, the winner of the year’s competition.

Alkotmány street was lined by the Walk of Cities exhibition, showcasing the cultural richness of our country, deepening our historical knowledge by displaying the cities of our country and of historical Hungary beyond its present borders. The reconstructed Golden Train was on display on the part of the street near the Parliament, the original of which was built in 1938 to transport our national relic of the Holy Right around the territory of historic Hungary.

On 15th March Square, outstanding sportsmen and sportswomen of the past and present recounted their successes and even their failures at the Sports Heroes’ Station. The commemoration of our nation’s most memorable sporting events serves to set an example for future generations and encourage them to lead a sport-conscious lifestyle. And on the square in front of the Vigadó, surrounding the iconic fountain, the Operetta Promenade stage, the Budapest Operetta Theatre performed a series of shows. For the weekend, the iconic dishes of the best Hungarian cafés of the country and beyond moved to the heart of the city centre, to Vörösmarty Square, as part of the Csárdafesztivál.

Over the weekend, tens of thousands of people were treated to the RoadMovie Live concert series on the Műegyetem-embankment, with a wide variety of performers to ensure that young and old alike could find their favourite artists. On the other side of the Danube, on the Nehru-embankment and at the Bálna, there was a Fashion & Design Festival, where one could discover the best of Hungarian designers, designers, craftsmen and even gastro-craftsmen.

This story is written for over a thousand years and ongoing today. Every holiday is special in its own way, yet this year’s event stands out in many ways for many of us. During the one and a half year, when we had to endure new challenges every day, the liberated joy of celebration seemed even more distant than light years away. It turns out that on the final frontier of fear and pain and even beyond, there is something that keeps us going, we have reserves of strength in ourselves and our community that we even did not suspect before. For over a thousand years, this courage, this loyalty and this humility carried and will carry us down the road.  This year our goal was a real power demonstration. About the power of humility, will, and faith in the community. In a form of a monumental event, including more than 15 locations , 500 programs, and the largest art event of the year, as the first large public gathering without any COVID restrictions since March 2020. At the closing ceremony we covered gigantic spaces and significant distances. The mapping distance was 300m while the mapped picture had to precisely adapt to the Parliament’s facade, which is extraordinarily rich in details. It was possibile for the first time ever because Panasonic launched new lens series which makes possibile the mapping from that distance. We used nearly 50 projectors with almost 1 700 000 lumen luminous power for the mapping. Its occupied 100 colleagues for 6 months, and staff of 250 for setup and disassembly works. The preparation take 1,5 years, covered 4,3 km production area, used, 400 moving headlights, 650 RGB colour effect lamps, 7 video walls and 2 LED trailers, PA coverage for the whole production area, broadcasting technology and employed 6 animation teams and 17 visual artists for the 30 minutes show.