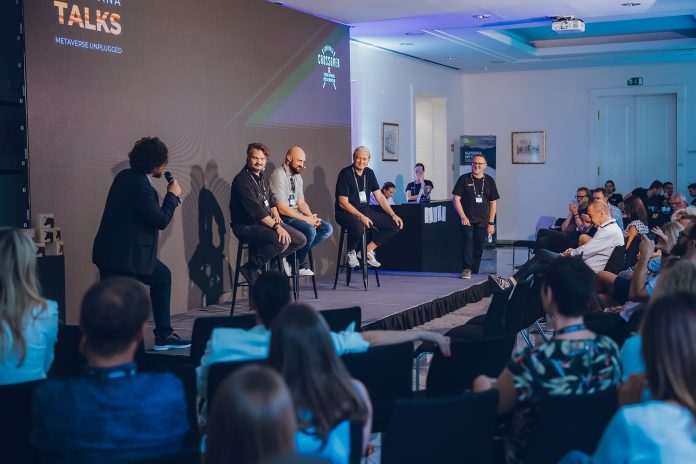 The festival of events returned for the 7th edition

Conventa Crossover, the central meeting point for the creative marketing industry of New Europe, has returned to Ljubljana. A slew of expert speakers delved into the core topics: sustainability, innovation, and dialogue. Crossover Legends and Meet Busters discussed the industry’s sustainable aspirations and greenwashing, while Ljubljana Talks panelists elaborated on the pros and cons of the metaverse.

The day started with a short introduction from the renowned moderator Jan Jaap in Der Mauer. Known for his immaculate and interactive moderating strategy, he inspired attendees to keep an open mind and stay innovative.

This year, the attendees convened at the garden of the Grand Hotel Union, where they could listen to an insightful presentation by Bo Kruger, who explained how an idea develops into a solution. He introduced sustainable events as a mystery and worked on equipping the attendees with a mystery-solving toolbox, comprising a high-pitch concept, experimenting and psychological safety.

Milena S. Nikolova was the second keynote speaker who explained how implementing the process of elimination in the meetings industry could help lower the carbon footprint and promote a greener tomorrow for future generations.

Jordan Waid played with the imagination of attendees and invited them to come up with a solution for Conventa Crossover’s future event in 2032. From a metaverse event on the Moon to a festival without borders, the attendees came up with innovative ideas for the future of Conventa Crossover.

Claus Raasted bolstered the attendees to implement human technology in meetings that matter. Joining online, Claus nonetheless managed to create a unique atmosphere, inviting attendees to cooperate with one another.

Conventa Crossover hosted a special edition of Ljubljana Talks that featured Aragorn Meulendijks, Mladen Ljubišič and Jens Oliver Mayer. Hosted by Gorazd Čad and Jan Oršič, the discussions focused on the future of the metaverse changing the digital landscape. The speakers all agreed technology is a tool we must build experiences around.

Now already in its 16th edition, this episode of Ljubljana Talks stirred a heated debate among attendees. In the end, the panellists agreed that even in the metaverse, some companies are greenwashing. Nonetheless, the future seems bright, with the metaverse opening new worlds for the industry.

Conventa Week culminated with the award ceremony for the Conventa Best Event Award. The absolute winner was Brand Arena Nordic Group, whose event, OneTonneIsland, won awards in the B2B category, Best in Sustainability, the Grand Prix Award and was, unsurprisingly, named the Best Event Agency.

The best B2C award went to Velo-City 2022, which took place in Ljubljana and fostered the development of sustainable mobility. In the B2I category, Planet Budapest won the coveted award, while the award for creativity was presented to the Cupra Hero project. The Audience Award was presented to the trailblazing Polish event Open Eyes Economy Summit.

Conventa Crossover thus marked the end of Conventa Week. Both Conventa and Conventa Crossover facilitated the growth of the regional meetings industry and, not least, promoted the trade show business in Slovenia. The dates for next year’s events have already been announced.