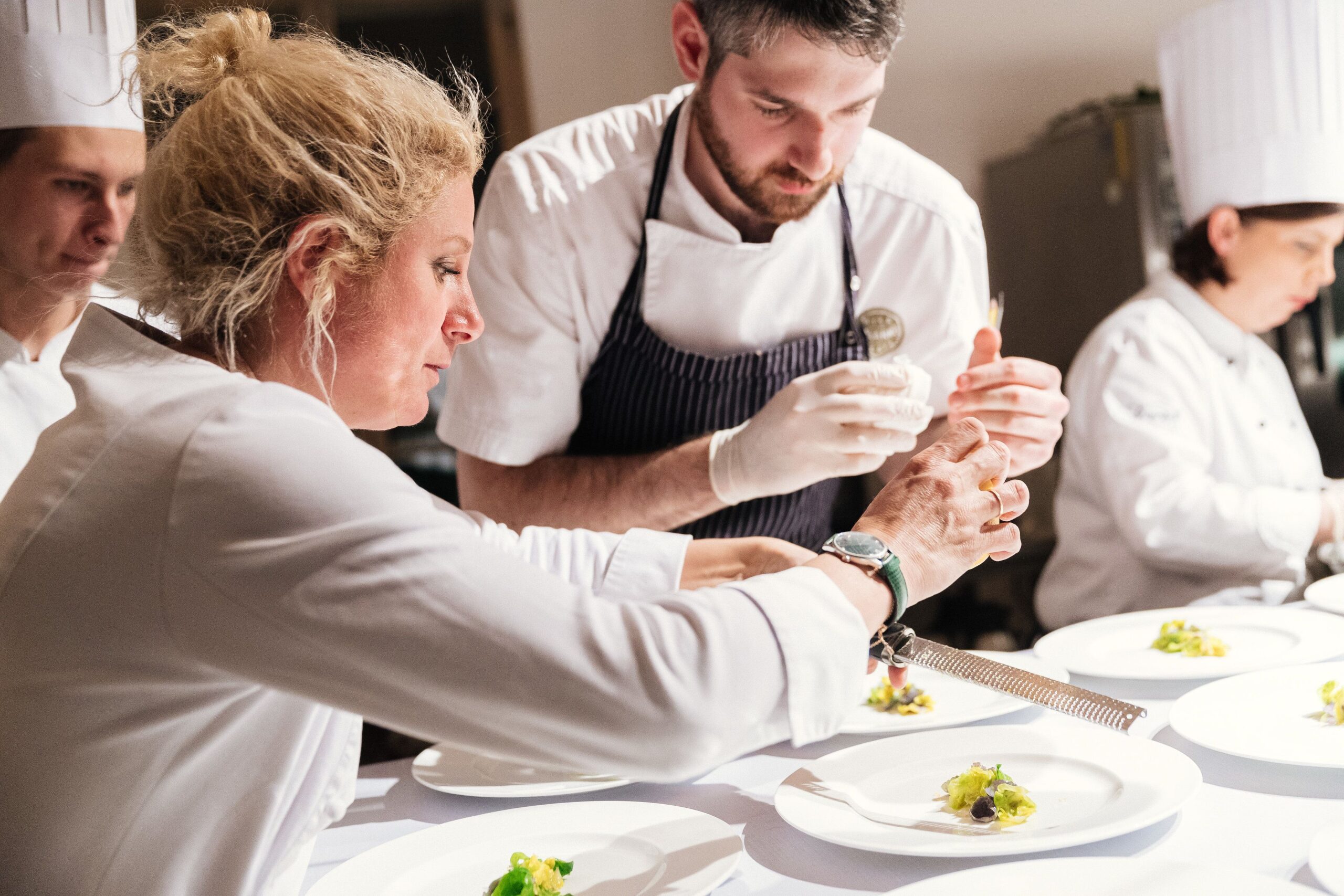 Between the 27th and 30th January we held the third Gourmet Cup, which is a proof that also in Slovenia it is possible to organize a culinary event which can measure up to similar events around the world. With the goal to become the most important culinary event in the region, Turizem Ljubljana (Ljubljana Tourism) and STB (Slovenian Tourist Board) become our partners. At the opening Cable Car Dinner, we organized an unforgettable culinary experience in the magical ambience of the mountains with MasterChef trio of judges, who pampered the guests with winter-inspired dishes. Following that was a Sunday extravaganza with various specialties by local and guest Chefs, among which also Michelin Chef.

The main novelty was to offer interesting lectures to the visitors and thematic round tables under the supervision of Ana Roš, where home and international experts shared their views and opinions. The peak of the event was momentarily sold out Experience Dinner in a magical ambiance of the Ljubljana Castle. Ana Roš, Philip Rachinger and Luka Jezeršek were cooking for 120 guests. The last day on Krvavec started with a gourmet breakfast with Janez Bratovž and continued with a skiing competition of caterers and wine producers and with enriched selection of first-rate food next to the ski slopes and concluded with an after party. Considering the amount of positive feedback, compliments and excellent media coverage, we can say with absolute certainty that this event reached its goal.

One of the biggest challenges in preparing such an event were most definitely international connections and forming recognisability of Ljubljana and Slovenia as a culinary destination. What makes Gourmet Cup unique and successful is above all cooperation and placing common interests above any individual interests. So in the last three years, Gourmet Cup presented 26 Slovene and international chefs – the event does not lean solely on internationally recognizable names, but promotes Slovenian cuisine as a whole. One of the most important goals we set for Gourmet Cup Ljubljana 2018 was to contribute to an even greater recognisability of Ljubljana and Slovenia on the world culinary map through a rich culinary selection and various programmes. Our long-term vision is to transform Gourmet Cup Ljubljana into the most important culinary event, not only in Slovenia, but also in the region.

Goals: Promotion of Slovenia and Ljubljana as a culinary country, promotion of the Central Slovenia as a region with rich cuisine, promotion of Ljubljana as an important culinary metropolis, strengthening the visibility of the brand Okusi Ljubljane, strengthening the visibility of the brand Gourmet Ljubljana, more overnight stays in Ljubljana during the low season, creating the most important culinary event in the region, assure the presence of home and international top chefs, encourage the media and general public to show more interest in cuisine.

The strategy of the company Jezeršek gostinstvo is to organize creative culinary experiences. This is our moto also when we organize unique events, among which we can also name Gourmet Cup Ljubljana. With our creativity, boldness, but above all mindset that we can organize a culinary event that is a match for other world-renowned culinary events means that we are on the right path. The creativity when organizing and executing the whole event and the creativity when planning of the culinary stories such as Gourmet Cup takes place is quintessential. However, without the creative input of all collaborating chefs, be it local or international ones, who, in four days, managed to present their culinary masterpieces to all guests and visitors of the event, this event wouldn’t have been so successful. The creativity as a part of cuisine is very important also for the visibility of Ljubljana and Slovenia as a culinary destination, with which we want to contribute to promotion, recognisability and reputation of the capital and the whole country, which could consequently help with the acquirement of the title European Gastronomic Region 2021. To this last one substantially contributed the peak of the event – the unforgettable 6 Hands Experience Dinner, where TOP Chefs Ana Roš, Philip Rachinger and Luka Jezeršek with their respective teams worked for 7 hours behind a 9-meter counter and transferred their life stories to plates for 120 curious guests.

In the past few years the interest for cuisine, both in Slovenia and around the world, has risen. We are certain that a huge reason for that is also Ana Roš and her success – she was named the best female chef in the world and her restaurant Hiša Franko received the 48th place among the best restaurants in the world. It is a fact that people want innovative culinary solutions and memorable culinary experiences outside of what classical restaurants have to offer. All this is guaranteed by the innovative approach of the Gourmet Cup Ljubljana, namely a high cuisine at an interesting locations and venues which is within reach for everybody. During the four-day event we enabled our guests and visitors to taste dishes prepared by top-level Slovenian and international chefs, among which also Michelin chefs, for a fair price. At the same time we encouraged people to socialize in the company of exquisite food and drinks, share new knowledge and excellent experience during the professional portion of the event.

In four days we created top-quality culinary experience, where, through innovativeness and creativity, we managed to bring together foodies, sports enthusiasts, home and international TOP Chefs, leading culinary critics and extraordinary experts in the field of catering, media representatives, bloggers, influencers, experts and businessmen, but also young enthusiasts, who are just beginning their life’s journey.

The organizer of the event is a family-owned company Jezeršek gostinstvo which prides itself with more than 35 years of tradition and experience in catering at various events, organizing over 2,500 of them each year. The Jezeršek company is a reliable and flexible partner in Slovenia and outside its borders, which guarantees creative and culinary experiences tailored for every individual and year after year upgrades the Gourmet Cup vision.

The execution of the Gourmet Cup Ljubljana 2018 was based on the work of experienced and professional team of over 60 people from the fields of catering, organisation, marketing and PR. Jezeršek gostinstvo realized the event Gourmet Cup Ljubljana 2018 almost entirely on their own (catering, organisation, marketing and PR, etc.) or with a bit of help from some outside contractors (set-up Hiša Vizij, design and CPG of the event by Av Studio)

With that Jezeršek gostinstvo proved once again that they are the only catering business in Slovenia capable of realizing a top-level culinary event at a professional level and additionally contribute to the promotion of Ljubljana and Slovenia as a culinary destination.

Gourmet Cup Ljubljana 2018 in numbers: 4 days, 2 locations, 20 TOP Chefs, among which also 3 Michelin star Chefs, 1,391 sold coupons for degustation snack at Gourmet on snow, more than 520 registered guests on all events, from that: 96 guests on Cable Car Dinner with TOP three Slovenian chefs Bine Volčič, Karim Merdjadi and Luka Jezeršk, 160 participants at the conference under the guidance of Ana Roš, 120 guests at the sold gala dinner (Experience Dinner) with TOP Chefs Ana Roš, Philip Rachinger and Luka Jezeršek, 121 competitors at the ski competition Gourmet Pokal, 31 registered non-skiing visitors, 6,374 visitors on Krvavec during the Gourmet on snow over the period of two day, 7,000 visits on the website which is 328% higher rate than same time last year, estimated marketing value of all media coverage (contents/editorials) amounts to more than editorial publications € 340,000.

With the purpose to become the most important culinary event in the region we directed a lot of attention to foreign media, journalists, bloggers and other influencers (apart from the local ones). We were building our story mainly on the basis of content marketing and PR, via various communication channels (TV, radio, press, social media, internet) where we included Ana Roš, local and international chefs (exclusive interviews, presentation of said chefs, recipes).

Media recognition of the event in the last year exceeded all expectations since the estimated value of editorials surpassed € 340,000*.

With the gathered funds, we made sure that the humanitarian institution Pod Strehco (“Under the Roof”) can now prepare over 2,780 meals for socially disadvantaged individuals.