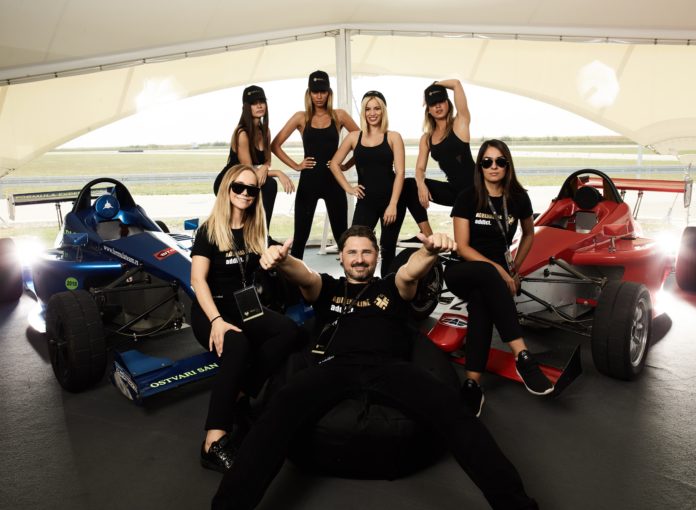 From the very moment Karl Benz lit a puddle of gas down the throat of his Motorwagen in 1886, mankind’s love affair with cars only grew stronger. Even James Bond would sure have struggled to maintain his debonair swag if Ian Fleming had him get out of something other than a 4-wheeled piece of luxury. And what’s more Bond than reaching dizzying speed in a first-rate vehicle?

Sexy, glamorous and action-packed, DMC Vekol signature “Becoming 007” team building for SECTOR Alarms offered the ultimate James BOND experience to the 80 lucky delegates. Whilst we couldn’t promise Ursula Andress, we aspired to deliver the energetic driving adventure in order to improve the team mood, build community pride and exercise cohesion. In accordance with company commitment to employees’ wellness, the goal was not only to let the managers get wild behind the wheel, but rather test their reflexes and endurance and introduce them to the life-saving driving practices through specially designed education and training.

The biggest challenge came way too early in the bidding process, when it simply turned out: Serbia is nobody’s usual suspect when thinking about premium cars. Also, during its uneasy past, it has lived to be in the spotlight of world’s attention and concern quite a few times too many, making it almost impossible to win the trust and sympathy of travel agents.

On the other hand, Serbia is a country that doesn’t do mild and driving is no exception. To simply say Serbs are obsessed with cars would probably be an understatement. Thus, it took a lot of convincing that our competitiveness as a destination comes from deep within: to us, cars are fun, empowering, fierce and just about enough dangerous, at a time when modern-day society conspires to take all little thrills away from us. Eventually, DMC Vekol team together with our respected local suppliers managed to be perceived as more than capable to execute a premium action-fueled event start to finish.

There’s no better way to trigger attention and break down the usual misconceptions than the good old storytelling. Did you know that, according to the official Ian Fleming memoirs, an inspiration for the loveable James Bond character was Serbian-born MI6 double-agent, Dušan Popov?

According to British secret files released for the general public in 2002, Popov was charismatic, cultured, good-looking and insanely rich, with a seductive gaze and a taste for fine liquor & fast cars and an espionage mission that brought him to London back in 1941. To introduce delegates to the life and work of the ruthless spy and notorious playboy, DMC Vekol event intelligence designed and printed a vintage newspaper piece of “Belgrade Times”, with a full centrefold article “My name is Popov, Dušan Popov: THE REAL 007 WAS SERBIAN”.

To engage delegates and keep their pulse racing even when they’re off the track, we decided to spice things up with SECTOR alarm’s own Pirelli experience. Ladies in cat suites looking all glamorous and dolled-up, leading Serbian fashion photographer Nebojša Babić and an open-air shooting studio added that final backdrop and turned the entire James Bond experience into a piece of art. So instead of some ordinary and expected gadget waiting for them in the hotel room, each delegate walked out from the event on the very next day with their own personal Pirelli calendar to remind them about the experience.

Only a short drive from the Belgrade city center and Hilton hotel, spreads the National Drivers Academy (NAVAK) – a massive facility occupying 33ha, out of which 3 km are paved tracks and the rest is additional off-road area.

The goal of creating the “Becoming 007” team building program was to blend high-end safety driving training with some James Bond driving manoeuvres and make it one-of-a-kind experience, unique in Southeast Europe, mixed up with a variety of colourful side activities that would keep the delegates adrenaline-pumped and entertained for a full day.

Also, who said transfers have to be a numbing experience? Not if you’re speeding up the high-way in a brand new Porsche to set the mood for the day!

During an intense 6-hours program, participants tested everything that could represent danger in real traffic through MICRO-tailored activities including: drifting on wet surfaces, high-speed braking, rally slalom, avoiding road obstacles, driving through deep waters and an off-road self- drive. In terms of 007 experiences, delegates were able to reconstruct the exact iconic chasing scenes from the movies, as well as other thrilling moves such as pushing another vehicle off the track or firing bullets as if at the shooting range

Also, besides a massive variety of self-driving activities, one of the key parts of the signature 007 experience involved special remote control simulators for critical situations. In simple words, delegated not only had the opportunity to do wild stuff with cars they’ve never tried before, but also to familiarize with rare and unexpected situations on the road.

The “Fantastic 4” of the delegates that scored the most points combined, won the ultimate prize: the one & only formula Predator laps.

“Becoming 007” team-building not only brought the delegates an overload of fun, but also a great portion of education. The post-event survey ended up showing clear improvement of delegates’ driving skills with a clear tendency of reduction of their driving risks thanks to sharpened anticipating and ability to make safe and well-thought-through decisions due to increase in hazard awareness. The experience got the delegates ready for many unexpected situations on the road and helped them detect probable errors of judgement. In the future, the company expects to obtain significant savings on insurance and vehicle damage by reducing the incident rates caused by the human factor.

Serbia is a place where it’s very easy to appreciate the beauty of nature and in order to preserve our community, at DMC Vekol we decided to declare War on Waste a while ago. In accordance with our Green Commitment Policy and sustainability credentials, all measures were taken during this program in order to minimize any negative impact on the environment.

“Becoming 007” team-building went full digital from scratch to execution – a responsive web site and an easy-to-use mobile app were created to keep delegates flawlessly updated, optimize every step of the planning process and give priority to paperless communication that is beneficial for both our business and our planet.

We always choose eco-minded suppliers that use energy and natural resources wisely, so the National Driving Academy made sure only the latest models of vehicles (up to three months of age) were used, with minimal emission of CO2 in order to decrease waste footprint on the surroundings. Also, all vehicles were turned off while not in use.

Instead of offering well known international specialities at all costs, at DMC Vekol we give advantage to local food – grown organically close to where it’s bought and consumed to avoid travelling long distances and consequent pollution. After the sanitary check, all food leftovers were donated to the local shelter for elderly homeless to eliminate as much waste as possible.

Lastly, in terms of giving back to the local community – a significant part of funds has been re-invested and dedicated to a safety training for five young and inexperienced drivers as a joint courtesy of SECTOR Alarms and DMC Vekol.