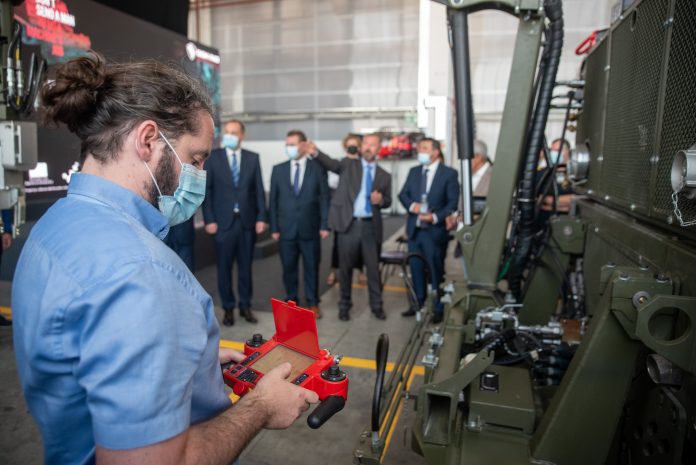 DOK-ING is a global leader in development and production of robotic systems for special purposes. With this event they wanted to introduce an innovative robotic remote-control system for operation in extreme conditions; it is a unique machine that can operate in conditions of open fire, explosion, collapse, high concentrations of explosive and toxic substances. Guests at the event were business partners, suppliers, government representatives and media. It was an event for 70 people. Goal was also to start with the stronger positioning of DOK – ING on Croatian market. Event was organized in one of the DOK – ING’s production halls and for this purpose the whole space needed to be reorganized and transformed. At the arrival, guests were registered according to epidemiological restrictions. First part of the event was the official part, with welcome speeches, followed by robot presentation – the most attractive part of the event. Reveal of the machine attracted great attention of guests, especially media. The break in the program was used for statements, short interviews with company representatives and photographing. After the break program continued with panel discussion with the topic „Opportunities for the Croatian Defence Industry in the Upcoming Financial Period of the European Union”. Panel discussion was followed by networking part – catering was served, and guests mingle, took photos by the presented machine. At their leave guests got goodie bags.

Our key challenge during organization and execution of this event was transformation of the space, which was one of the production halls at DOK-ING factory. Preparations of the space took over a week – the challenge was to keep an atmosphere of the industrial hall but make it appropriate and comfortable for guests to spent there several hours. To have this result, we cleaned the whole space and kept only elements that gave industrial charm and didn’t collided with other scenography elements. Additional challenge for the execution of the event was the fact that the day of the event was the hottest day of the year, so few days before we had to make adjustments in scenography to place air conditioning machines, which were cooling the space the night before the event.

Since this event was for the guests on a high level of management and government positions, the whole atmosphere of the event was ought to be quite serious, with strict protocols. Therefore, we wanted to make presentation of the robot attractive and memorable. We organized it as a premier drive. Robot was hidden behind the black curtain and at the reveal moment an operator started the 17-ton heavy machine, curtain was open, we released the fog, all the lights were pointed at the robot, and it made its first public drive through the secured corridor, right next to the sitting guests, featured by the intro music from The Warriors movie. Premiere was a success, because we couldn’t keep our guests on their seats, especially media representatives.

The true innovation of this event was presented robot. The guests of the event were quite conservative public, so we didn’t see as appropriate to introduce any innovations related to organization of the event.

Preparation of the event started few weeks before the event in order to make the space suitable for the event. Setup of the scenography, technical and program rehearsal were done day before the event. Another program rehearsal was done morning before the event. Central part of the scenography was a big stage with LED screen behind. Client had many interesting presentation movies, which were shown on plasma TVs in the space. Official start of the event was 10:30 AM. Protocols of the government representatives arrived earlier, so we went through seating charts and program with them. Response from media representatives was very big, so they took the whole space reserved for cameras. At the arrival guests were registered and served with the welcome drink and a bottle of water because it was a very hot day. First part of the event, with speeches and reveal of the robot went as planned, but the break for statements and interviews we had to prolong, again, due to the great interest of media. Afterwards, panel discussion was also held as planned and was a very interesting content for media, for additional questions later on. Networking part was final part of the event, catering was served, and guests took opportunities to take a closer look at the robot and mingle. Event ended at 2PM, as planned. In total it took a team of 12 to prepare and execute this event.

Due to epidemiological restrictions, targeted number of guests was 70, and the goal was reached. Also, all media representatives we invited, replied, and attended the event.

Due to big media interest, at the event, and after the event, fey media wanted to make additional interviews and stories about the company and the new innovative robotic system that was presented, so in the next days we organized additional media meetings and interviews. In total, this event resulted in over 40 media coverages, including coverage from all 3 biggest TV houses in Croatia.

To minimize any over-printing, we made both save the date and the invitation digital, also all materials for media were in online version.